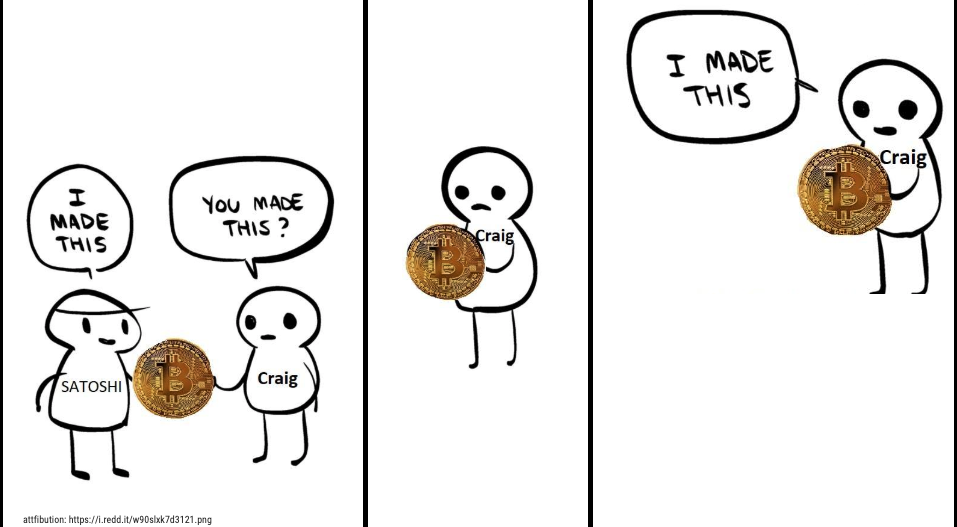 Since the 2009 creation of Bitcoin, mystery has surrounded the true identity of the pseudonymous, Satoshi Nakamoto. Speculations and investigations to prove the real identity of Satoshi Nakamoto have not produced hard evidence. Many believe that the real Satoshi was likely Hal Finney, a cryptographer who had documented emails and wallet transactions supporting his involvement, and potentiality for being the real Satoshi. Finney even lived a few blocks from an actual person, Satoshi "Dorian" Nakamoto, whose name could have been used to obfuscate Finney's real identity. Sadly, Hal Finney passed away in a 2014, so little more can be done to investigate this. Others also speculate that computer scientist Nick Szabo may be the real Satoshi, but Szabo has continually denied the claim, despite multiple efforts to prove it. That leaves us with Craig Wright.

In April, Calvin Ayre (founder of the Ayre Group and Bodog) Tweeted on behalf of Craig Wright stating:

Craig has started filing lawsuit against those falsely denying he is Satoshi....they can all have a day in court to try to prove their fake case but the judge will rule that Craig invented Bitcoin because he did and he can prove it. https://t.co/d2W44mU9Tl

Vitalik Buterin, co-creator of Ethereum and star of the above video, is one of the people being sued by Craig Wright on the grounds of libel. Once wind of Wright and Ayre's threats caught, a deluge of outcry came in support of those being targeted by Wright.

Craig Wright is not Satoshi.

Anymore of this sh!t, we delist! https://t.co/hrnt3fDACq

Every exchange should delist BSV simultaneously on May 1st in a sign of solidarity behind the only Bitcoin that ever mattered.

Before lawsuits were filed, Wright's attorney sent out a letter advising those accused of libelist comments. Peter McCormack, host of the popular WhatBitcoinDid podcast, Tweeted out the letter which he received:

1/ So I got my letter from Craig Wright and @CalvinAyre. This is what they are sending out to people, now you can all see.

I absolutely reject their requirements.

(PS I don't recommend anyone else does this). pic.twitter.com/olpLUdwDyM

My formal response to the letter issued by the lawyers of Craig Wright and @CalvinAyre. This was sent today. We look forward to resolving this quickly and efficiently. pic.twitter.com/ANSmF1kH8k

Believing the importance to promote truth, and stand against claims which he deemed to be fraudulent, affecting the lives of others in the community, McCormack welcomed the escalation from Wright, Ayre and their legal team. Responding as promised, McCormack was served papers indicating that a lawsuit had been filed. Yesterday McCormack had choice words of his own about the upsurging situation:

Sorry for the confusion. I have spoken with two of the top legal firms in the world this morning. I will instruct one within a week.

Let's go get this motherfucker!

Still carrying his own torch, Craig Wright created a stir earlier this week when he filed a copyright registration with the U.S. Copyright Office. Determined to not only prove that he is Satoshi Nakamoto, Wright's intentions seek to demonstrate that what we currently refer to as Bitcoin (BTC) is not the real Bitcoin. Wright and his nChain team forked BitcoinSV (BSV) from the (already deceptively-named) Bitcoin Cash (BCH) earlier this year. So his efforts to be known as the author of the Bitcoin whitepaper, and then using his "credibility" ("Craigability"?) to add FUD to the overall market and its investors.

What really seems to upset the community is that to prove such a claim as being Satoshi would really be pretty simple: private key ownership. Wright could prove his claimed identity by signing a simple message using his private key, which could then be verified by the recipient with the corresponding public key...but he hasn't. Wright has done strangely, overly complicated private demonstrations for "less-technically knowledgeable" audiences, using raw command line tools to verify his own signature; no reason to be skeptical about any of this, right? Speaking of being skeptical about Wright's actions, last week, his legal team was forced to withdraw an email (supposedly) from Dave Kleiman (deceased professional partner), whose family is suing Wright alleging theft of around 1mil Bitcoin.

What's important to take away from all of this is, the U.S. Copyright Office is merely a repository to protect creators of art and lit, but they do not give official recognition to any person or entity. Also, Craig Wright has not followed through with providing any simple or irrefutable proof (signing something with his key, or moving BTC into and out of an early Bitcoin address) publicly. Until he does, there is no reason for anyone to take his claims seriously.

Reaching a new high, and more tales of public interest all happening, Last Week in Bitcoin...

2019 highs, a reason to eat pizza, more major Bitcoin acceptance makes This Week in Bitcoin, another great one....

Craig Wright has not been recognized by the U.S. Copyright Office as the author of the Bitcoin whitepaper...